Do Writers Write Every Day?

Hey y’all, so I was wondering what everyone thought about writers having to write every day.  I talked about it on my youtube channel today, but I wanted to ask all my writers here on my blog.

I feel that writing every day isn’t necessary if you have a grasp on your writing style. I think that if you trouble with certain things or don’t have the greatest imagination then you might want to practice writing.

I always have ideas coming from everything and I don’t write every day, but I don’t think my writing suffers because of that. I think that if you want to be a writer and don’t know what to write about or what you like then yes, you need to write and you need to find something that you enjoy writing about and you need to find your voice, but for me that’s not the case.

I write when I want to and I know my voice, so I focus on novel writing when I feel like writing.

I think the main thing is not to stress writing either. If you love writing then it should never feel like stressful, annoying work.

Helloooo to all my writers,

I have an instagram that is for writing. It features writing prompts daily
as well as I do book shout outs by request. I don’t know if it’s the best
Instagram for writers, but it’s a pretty good one to get you thinking. 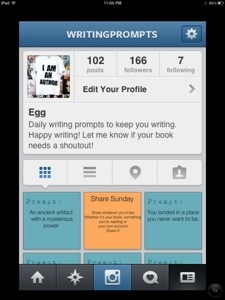 The Purgatory Press/ After The End BOOK REVIEW

The Purgatory Press/ After The End  by John Culbert

Vanished poets, overlooked artists, hapless visionaries: The Purgatory Press opens a tantalizing window on a publisher’s catalogue of improbable books. Dark, comical, and startlingly inventive, After the End is a dazzling display of postmodern storytelling. These short fictions showcase the many talents of an emerging author.

Prompt #2: You befriend a robot

The main character is a son of two government science technology engineers. They’ve always lived in the nation’s capital where his parents worked in the science headquarters, but his parents are always going away for research on their projects. Then, his parents are killed in a lab explosion. His parents have said that if anything happens to call this number. The number leads to this robot who he comes friends with to find out what happened to his family and protect their research which is the turning humans into robots for the government.

Remember to like if you liked this prompt answer and also if you want to share your answer that’s fine to.

Prompt: You can speak to fish.

The main character is a guy who is a lifeguard for a beach. He is a typical surfer guy with sun died blonde hair, perfect tan, and muscles.

He wakes up one morning in the lifeguard shack as he always does. He is half awake stumbling around getting dressed and fixing something to eat. Then, he comes to his fish tank where he feeds his fish. Then, the fish starts to talk, “I hate these stupid dry flakes you give me.” The fish has an attitude, if you hadn’t noticed. The lifeguard can hear the fish and he’s looking around like did you just speak to me? The fish can’t believe that the guy can understand him. The fish is just like, “This guy is going crazy.” The guy starts having a conversation with the fish asking how this happened and how can he understand the fish. The lifeguard is freaking out trying to pinch himself and sticks his hand in the grease of the bacon that he was making for breakfast when he realizes that this is real. As he is trying to figure out what’s happening there’s a siren about a shark being in the water. He goes out to search and make sure the water is clear. When he gets out in the water he and the shark start having a conversation, but the people in the shore think that he is being attacked. His lifeguard buddy comes jumping into the water to get him out. The guy starts getting really angry because he was in the middle of a conversation and his buddy is confused because he thinks he saw his friend trying to talk to the shark. The guy tells his buddy to leave him alone. The guy goes back to his shack where he and his fish start talking and because he’s breakfast is ruined and his buddy is here he decides to take the fish in a cup with him to a diner on the boardwalk. He is trying to talk to the fish while people stare at him to figure out why he can talk to fish and why he can talk to them now.

If you didn’t see the brainstorming for this check out my youtube channel: http://www.youtube.com/elliegracenation

All this week my book Cigarette Suicides is free on Kindle! Get your copy! http://goo.gl/rLKrP

Previously on the show

Junk I use a lot